You are here: Home1 / plates 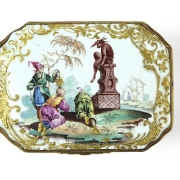 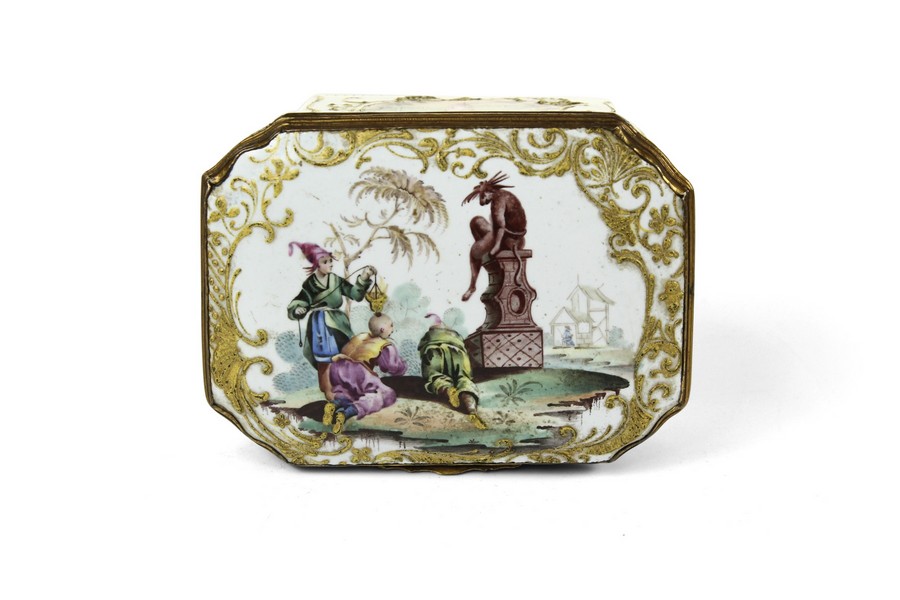 Description:
The lid and sides painted with designs from the prolific French artist Jean Pillement (1790-1808) rectangular in shape a large proportion imaginative and based very much on the orient. There are 39 engraved plates in the Ladies Amusement, inspired by the Chinese
Dimensions:
Height: 4cm
Width: 7.5cm
Length: 6cm
Circa:
Condition: good

*Any condition statement is given as a courtesy to a client, is only an opinion and should not be treated as a statement of fact. Authenticated Internet Auctions shall have no responsibility for any error or omission. The absence of a condition statement does not imply that the lot is in perfect condition or completely free from wear and tear, imperfections or the effects of ageing.

In the late Seventeenth Century ‘porcelain fever’ broke out across Europe. Princes and wealthy merchants were consumed by the passion to collect and use Asian porcelain. Imports from China and Japan were expensive and ownership was a tangible sign of prestige and taste. After many experiments and years later in the Eighteenth Century, Europe developed its own techniques and porcelain manufacture spread and dominated the production centres of taste throughout continental Europe.

Austrian Porcelain began in 1718 at Claudius Innocentius Du Papier’s factory together with key personnel from Meissen before it was taken over by Empress Maria Theresa in 1744. English porcelain became commercially successful in 1745 with the establishment of the Chelsea factory and later at Bow, in the Midlands, East Anglia and the West of England. Charming ornamental birds and animals for the middle class market became particularly popular.

The French goût chinois (Chinese taste) also gave way to a French national production of porcelain in the Eighteenth Century as demand amongst the nobility and wealthy bourgeoisie for porcelain decoration, dining wear, refined porcelain tea drinking and chocolate plates soared. Small factories such as Chantilly and Villeroy-Mennecy enjoyed noble patronage but it was Vincennes-Sèvres that achieved royal patronage and ownership and became the arbiter of style throughout Europe until the French Revolution, whereafter Limoges and the production of hard-paste porcelain took off.

German porcelain was first produced commercially at Meissen in 1710 but by the end of the Eighteenth Century, it became fashionable amongst German royalty to own a porcelain factory and they cropped up throughout the German states. Frederick the Great sometimes referred to himself as the ‘best customer’ of his Royal Porcelain Factory in Berlin, many of which were decorated with Rococo designs or Harlequin performances.

The Commedia dell’Arte formed one of the most distinctive subjects of porcelain collectables. This was a popular form of theatre throughout eighteenth century Europe, displaying colourful costumes and comic poses and gestures of the actors. Porcelain figurines were usually ornaments for tables.

Any cookies that may not be particularly necessary for the website to function and is used specifically to collect user personal data via analytics, ads, other embedded contents are termed as non-necessary cookies. It is mandatory to procure user consent prior to running these cookies on your website.